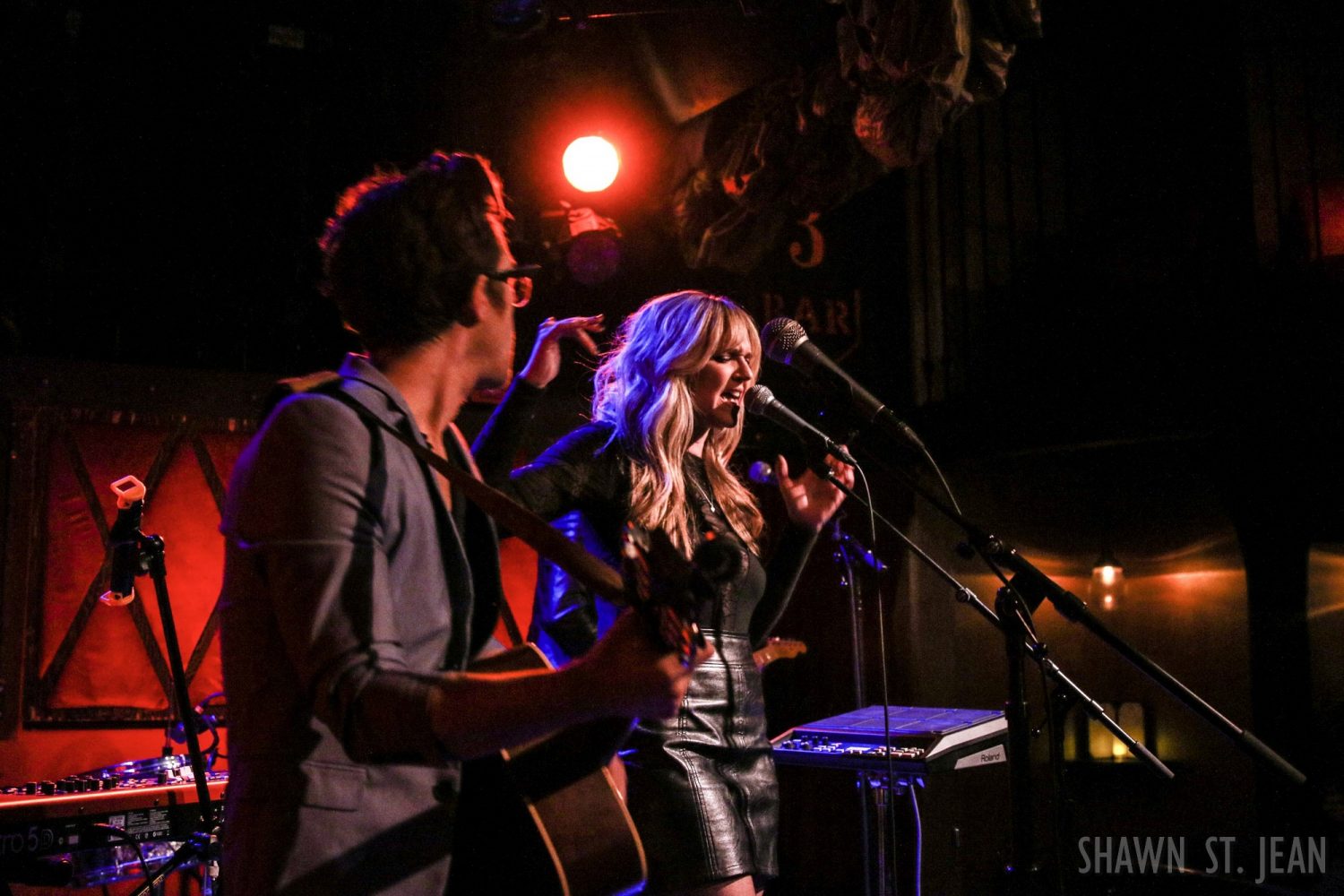 Finding Their Sweet Spot: An Interview With Towne

During their recent stop in NYC we caught up with Towne to chat about new music and why we all just need to move the milk.

Steevie Steeves and Jon Decious of the Nashville-based duo Towne were in New York recently to perform at Rockwood Music Hall. It had been about a year since we last saw them here in the city, so after their set we all walked around the corner to The Meatball Shop to catch up over some food and drinks.

Shawn St. Jean: Let’s talk about new music. You started off the year by releasing a couple new songs. What was the inspiration behind them and how did they come to be?

Jon Decious: Waiting came about from an idea our publisher had for a creative retreat to Montana. No expectations, no pressure. We drive out to this cabin in the woods – it was actually an old logging cabin with no electricity. We met four beautiful strangers and spent most of the night eating pizza and getting to know them. At about 2:30 in the morning we wound up having a song. They had booked us studio time at 8am the next morning. We were like, alright, let’s go and record this song. We didn’t even have time to work up vocals for it so Steevie is really the only vocal on it and did it in one take. We left all of the production up to them which is why when you hear it, it doesn’t necessarily sound like anything else that we’ve done, but at the end of the day that was kind of the point. 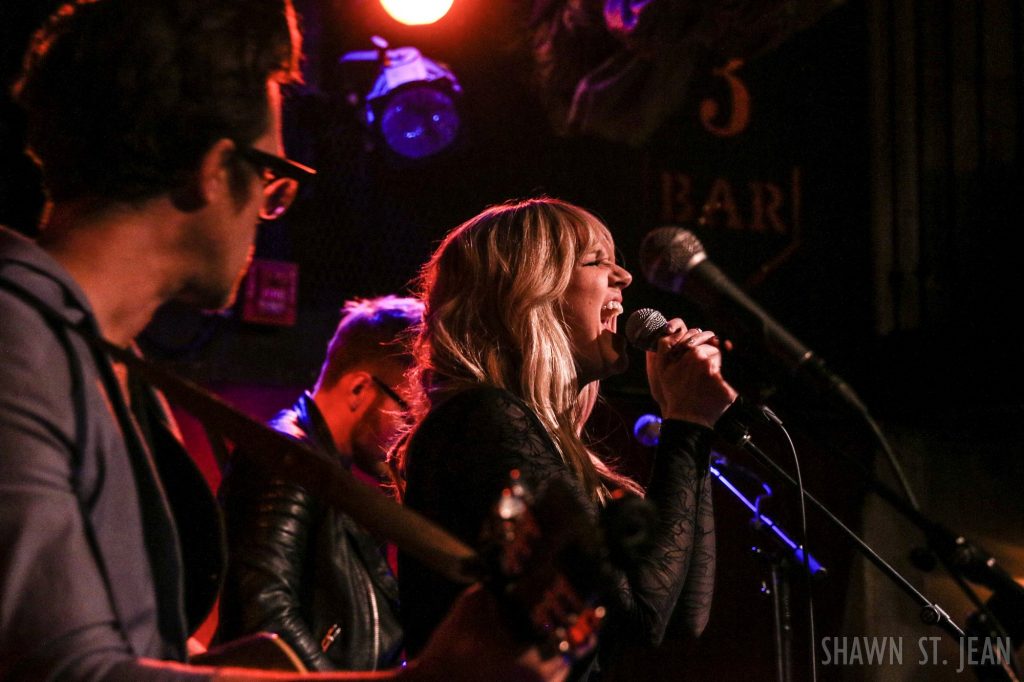 Steevie Steeves: It was a cool thing because the vocal is really raw – I barely even knew the song – but then they did their own thing production-wise. We let them do what they do, so we got a really cool mixture, and something new to us. It’s a cool song, and I think it’ll have a life somewhere, someday. I like the thought of a song having a life – it really matters.

Shawn: Let Me Let You Go is the other song you released recently. This one is so interesting to me. If you just read the lyrics you could imagine it being this slow, sad, ballad.

Shawn: But the way you recorded it, it almost becomes a dance song. It’s such an interesting dynamic, how did you come up with that one?

Steevie: We wrote Let Me Let You Go with our producer Ryan Peterson.

Jon: Ryan was sitting in there playing piano and singing the title, and we kind of ran with that. The song started as a mid-tempo rock kind of thing, and we loved it, but everybody else wasn’t totally sold that we should record it.

Steevie: Until Ryan put a really cool drum beat on it and it changed the whole essence of the song. Jon and I were like, Yes! That’s It. It’ll shock you what can change a song. We just fell in love with it and said we should totally record it. My favorite line from it is ‘I’m your one and only, only when you’re lonely.’ I just think that’s soooo relatable. I’ve been there!

Shawn: As you two continue to evolve and grow as artists how do you think this new music compares to what you previously released?

Steevie: We’ve evolved so much from an acoustic act – it came off as very folk because it was always just the two of us. With the outreach of writing with different people and getting to know more musicians and having them lend their expertise to our songs, it just evolved into a sound that we could totally relate to. It’s almost like experimental folk pop. 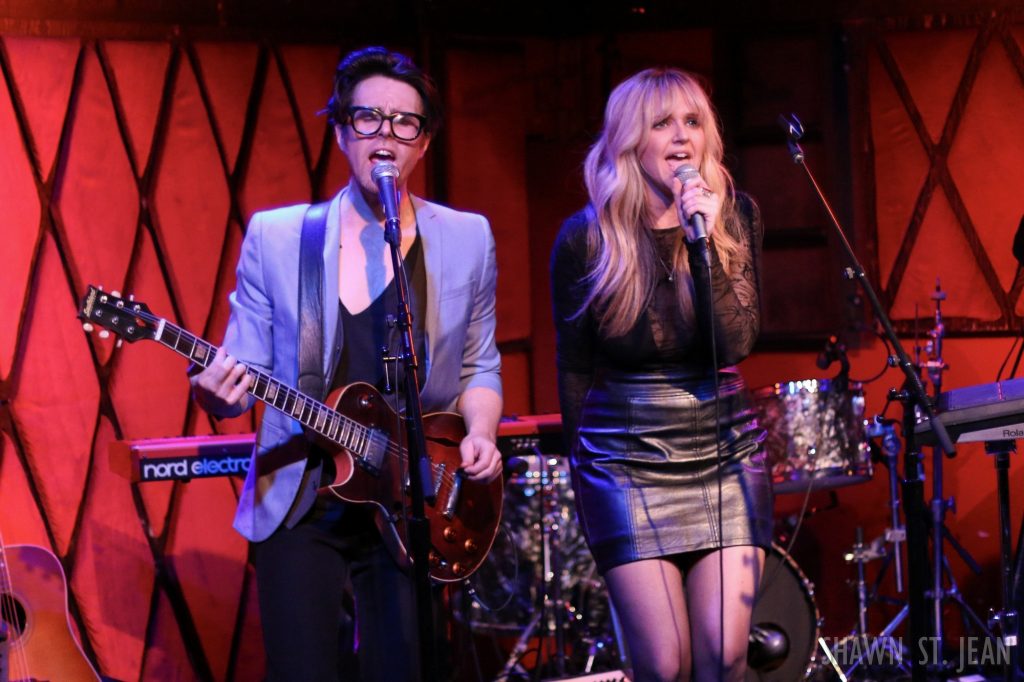 Jon: Yeah, it evolved into all these different categories. The hardest thing about writing and performing with Steevie is that she’s so versatile. Literally the girl can do everything. I don’t care what band you’re talking about, the lead singer is the engine. The trick is to find the direction that the lead singer believes in. If the singer can sell it, then you might have something. More than anything we wound up just narrowing our target to saying, ‘this is the thing,’ as opposed to the entire ocean. With a singer like her, you’ve got every possibility in the world, so what should you do. It’s not what ‘can’ you do, but what ‘should’ you do. We’re just evolving and finding that answer.

Shawn: So what else can we expect for new music? Is a new album in the works?

Steevie: We’ve got so many songs that I definitely want to record in the very near future. We’ve been busting our asses writing and writing and writing. I think we’ve finally found the niche that we relate to – that I believe in, that I can sing and that feels good to me.

Shawn: In today’s environment does it work better to just put out singles rather than focusing on an album?

Steevie: The fans that we already have are really special to us. On paper it might look like a small number, but it’s definitely a big deal to us. They’ve been wanting new music forever. We want to feed them, so we’re just gonna continue to do that until it’s possible to do a full length. I just want to make the fans happy.

Shawn: You’ve got a very cool project lined up in Brooklyn tomorrow – talk a little about that.

Steevie: Tomorrow’s gonna be so cool. So we’re goin’ to this place called Leesta Vall Sound Recordings. It’s perfect timing now that we’re in New York City. So we’re gonna go out to Brooklyn and record a live acoustic version of our next single, Camouflage. Fans have pre-ordered their version, and we’re gonna go in a record each one individually. It’s just so freakin’ cool. I never thought in a million years that I’d be able to do that.

Shawn: Well I put my order in, can’t wait to listen to it.

Jon: The cool thing that we did with that – it was kind of intentional – we didn’t even tell people what the name of the song is going to be. This is just gonna be the next song that we’re gonna put out. So they’re kind of puttin’ a little bit of faith in us – I promise this won’t suck! 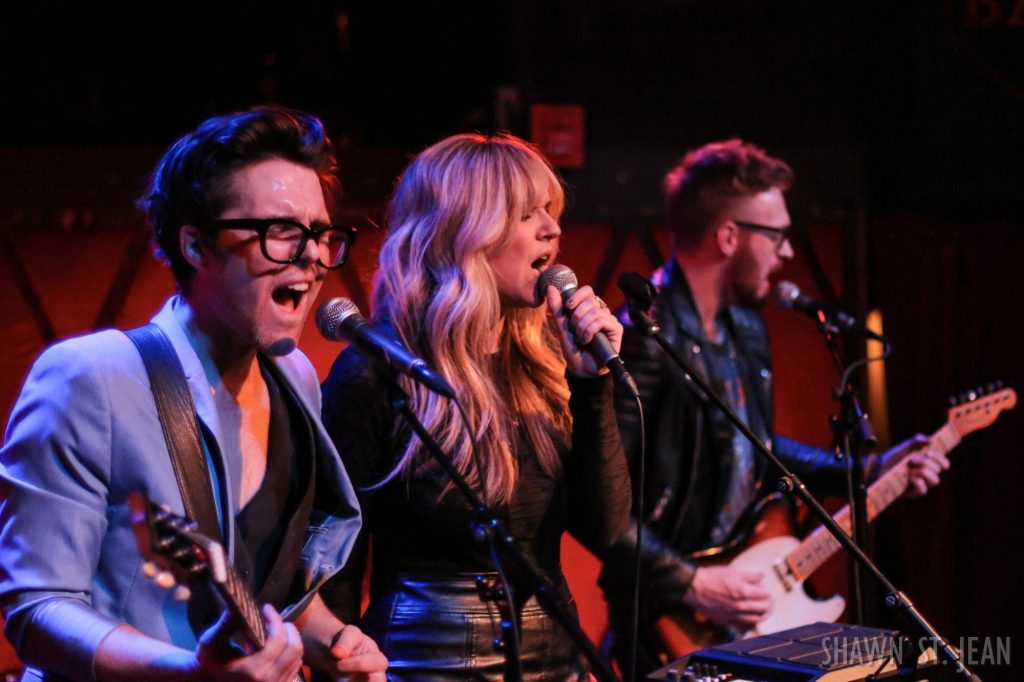 Steevie: And because Luke [Marshall]  is standing right here, our guitar player…most of the time, you always have new musicians every time you go out and do your thing, but it’s really special to form a band that’s consistent.

Jon: It becomes a family.

Steevie: Yeah. We’re really lucky to have him. When we go and do the vinyl tomorrow he’ll be playing on it with us. Jon and I have been doing the acoustic thing for so long, to have part of the family come in and be on it makes it even more special.

Jon:  That’ll be another growth of our sound and direction, gettin’ Luke into the fold. We’re playing so often with him that’s really where that magic starts to happen. Steevie and I and our producers have finally got us on this right road. Now we gotta put the attractions on the road. You find someone like Luke who’s incredible at what he does, and meeting Luke was about as random as me and Steevie meeting. To sidetrack for a minute, last year we had been asked by this lady from 4H if Steevie and I would come and speak at a 4H convention in Nashville.

Shawn: Not about raising horses?

Jon: We went down to Acme Feed & Seed on Broadway and this guy [pointing at Luke] was also there to speak. After he finished we met and got to talking.

Steevie: And we needed a guitar player!

Luke Marshall: And I realized that Jon had been in The Pink Spiders – when I was a kid growing up that was one of my favorite bands. One thing led to another.

Jon: Musicians meeting at a 4H event is about as random as it gets. Since then it’s just felt right. He’s not a jerk, he’s got good taste. And that’s hard to find.

Shawn: I saw that you recently opened for Easton Corbin in Chicago – how was that experience?

Steevie: That was a phenomenal opportunity, and we’re so glad to have been given the chance to open for a main act like Easton. His team is phenomenal and they’re all really, really nice guys.  That was the first time we’d played to a crowd of that size in a theater. I think it went really well, and it was fun as hell. 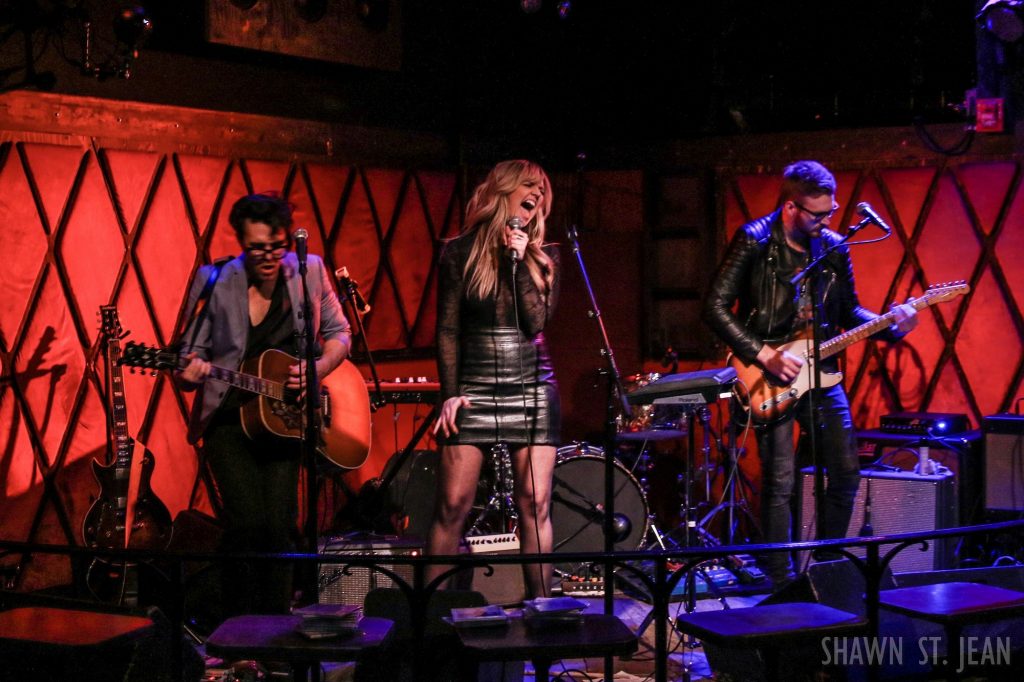 Jon: That show was the first time that we played with our current set up with Luke and our drum pad. That was really baptism by fire. And the audience loved it.

Steevie: The audience was so engaged in what we were doing and it went off really well.

Shawn: Let’s talk a little bit about the state of country music right now and specifically the lack of female representation on country radio and Spotify’s top country playlists.

Steevie: If I thought about that every day I’d probably get pissed and get derailed and not focused. Over time our fan base will grow. I just want fans. I want to connect with people, I want longevity on the road, and I want to be able to play to a packed house and have everybody into what we’re doing. I think that’s totally doable.

Jon: It makes me think of one of my favorite quotes from Amos Lee. He was being asked about radio play and he said, ‘It used to get me down, but when you go to the shows of people that are getting played on the radio – there’s 20,000 people there – the crowd just sings whatever they hear on the radio. You go to my shows for around 8,000 people, they’re singing every word to every song I’ve ever written.’ I will take that all day long.

Steevie: That’s important to me.

Steevie: You open it up, there’s the milk. But what’s behind the milk? That’s where I’m at right now.

Jon: Maybe you’re lactose intolerant. What if you ignored radio altogether and just focused on your fans. What a fucking novel concept.

Check out our exclusive photos from Towne’s performance in NYC: 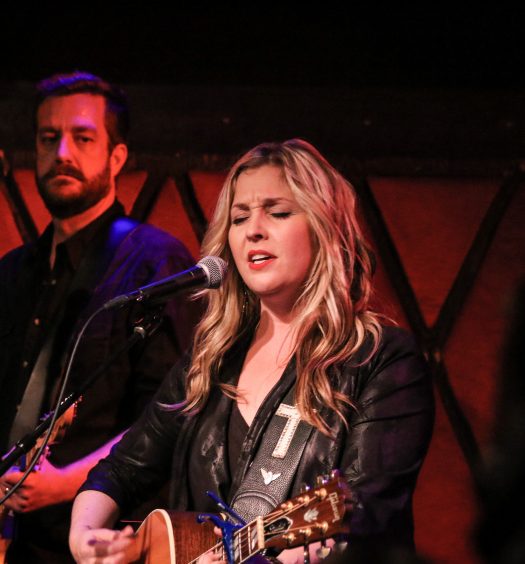 Sunny Sweeney Shows NYC There Ain’t Nothing Wrong With Texas 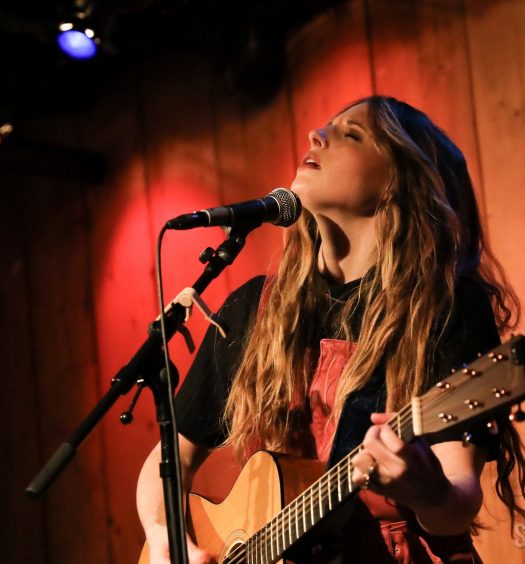