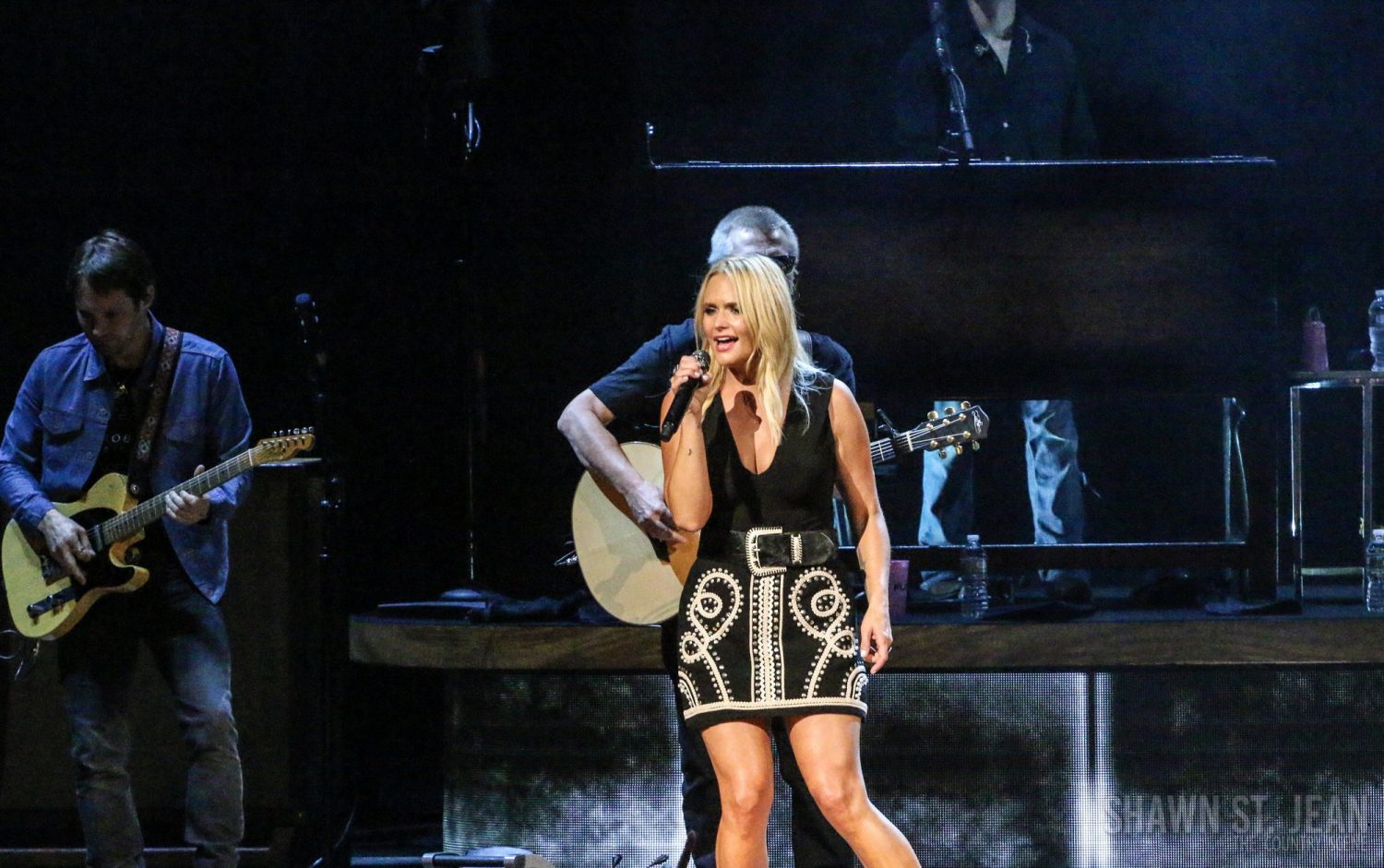 The seven-time ACM female vocalist of the year was at Hartford CT’s Xfinity Theatre with Kip Moore and Brothers Osborne on Friday night as part of her 2016 Keeper of the Flame tour.

Miranda Lambert’s songs aren’t short on emotion. Her skills as a singer-songwriter bring you in to each story she tells. Feelings of nostalgia in Automatic, tense anticipation and survival in Gunpowder & Lead, and loss and sorrow in Over You. But it was The House That Built Me that brought the house down in Hartford. 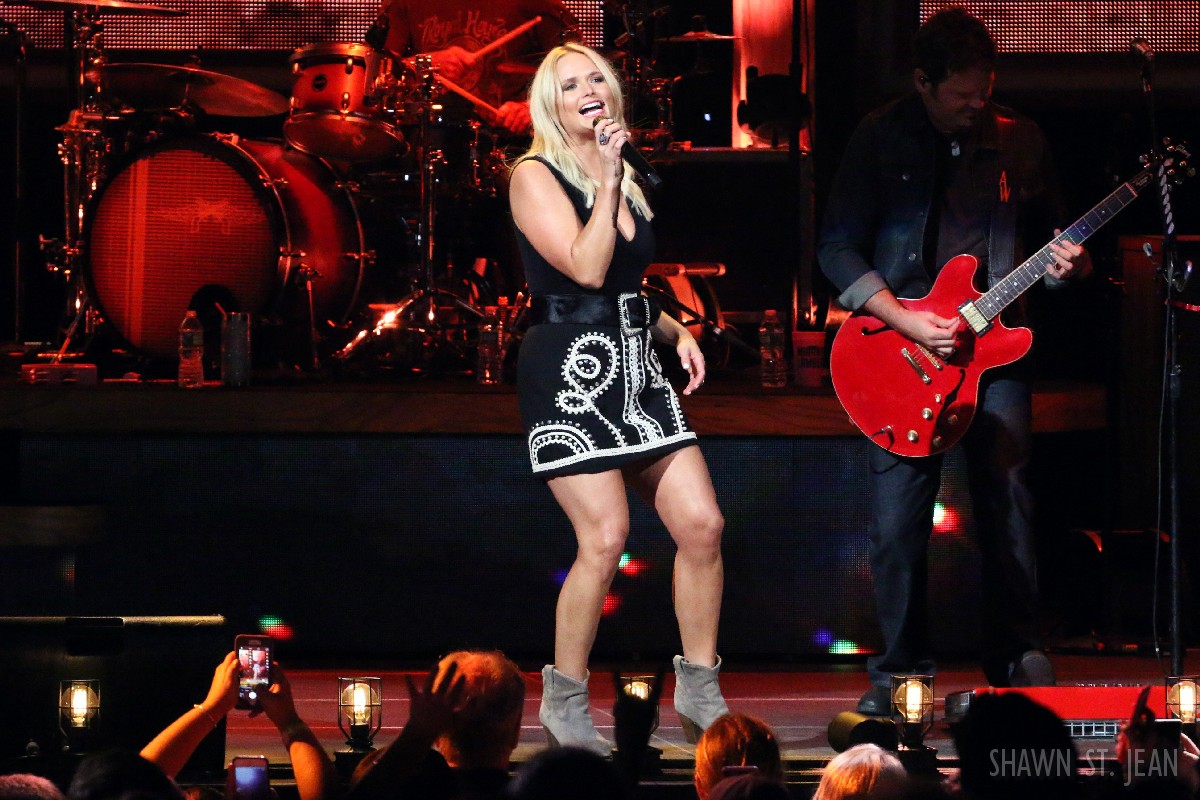 Miranda Lambert at Xfinity Theatre in Hartford CT on August 19, 2016

Among the thousands of country music fans packed into the Xfinity Theatre, Jeff Tudisca and his wife Angelica were front and center in the pit, just a few feet from where Lambert stood. As she stepped to the mic and started into the opening lyrics of The House That Built Me, Jeff held up a sign that read:

3 Combat Tours… Your Voice Was The Last Thing I Listened To EVERY NIGHT!  THANK YOU!!!

When Lambert saw Jeff’s sign she stopped singing, walked towards him and said, ‘Really?’ As he shook his head yes she pointed at him and said ‘Damn It!’, and the tears started streaming down her face. She brought the sign up on stage and held it up for everyone to see. The crowd absolutely erupted in applause. Lambert was visibly overcome with emotion, unable to complete the song. In her place thousands of voices sang together. It was a perfect moment of unity:

“I thought if I could touch this place or feel it, this brokenness inside me might start healing. Out here it’s like I’m someone else, I thought that maybe I could find myself.”

I caught up with Jeff after the show to hear his story.

Jeff joined the Army in 2005, just after his 19th birthday. The next year, while he was on his first tour in Afghanistan, he received a random care package that had all the essentials: toilet paper, socks, deodorant and a mixed CD. The CD had two of Lambert’s songs on it: Greyhound Bound For Nowhere and New Strings. “When I first heard her voice it made me cry like a little kid,” he said. “It brought me home. Her voice literally brought me home.”

Jeff went on to complete two more tours, both in Iraq. All that time he continued to carry that mixed CD, and eventually got an MP3 player that he loaded up with Lambert’s music.

“Through my 3 tours, you name it, we saw it,” Jeff recalled. “It didn’t matter whatever happened out there – I would always crawl into wherever it was I was sleeping and listen to her voice. I remember days that were so bad that your heart ached just for a hint of better things to come.”

“That voice though,” Jeff continued, “when she sang and I closed my eyes, I wasn’t afraid, I wasn’t alone – I went home. That’s by far the best gift anyone can give you.”

Here’s a brief video clip of Jeff’s moment with Miranda that his wife Angelica recorded:

As the crowd finished The House That Built Me, Lambert was able to compose herself and said, “It’s time to get mad again – can we get angry again?!” With the crowd’s enthusiastic agreement, she introduced her latest single, Vice, by saying “I kind of had a crappy year last year.” The crowd chuckled but then was immediately engulfed by the powerful emotions of regret, heartache, and loneliness.

The back half of Lambert’s set included Mama’s Broken Heart, White Liar, and Little Red Wagon. For her encore, she was joined by Kip Moore along with John and TJ Osborne for covers of Willin’ and Me and Bobby McGee.

You couldn’t ask for two better openers than Kip Moore and Brothers Osborne, both of whom are kicking off their own headlining tours later this year. 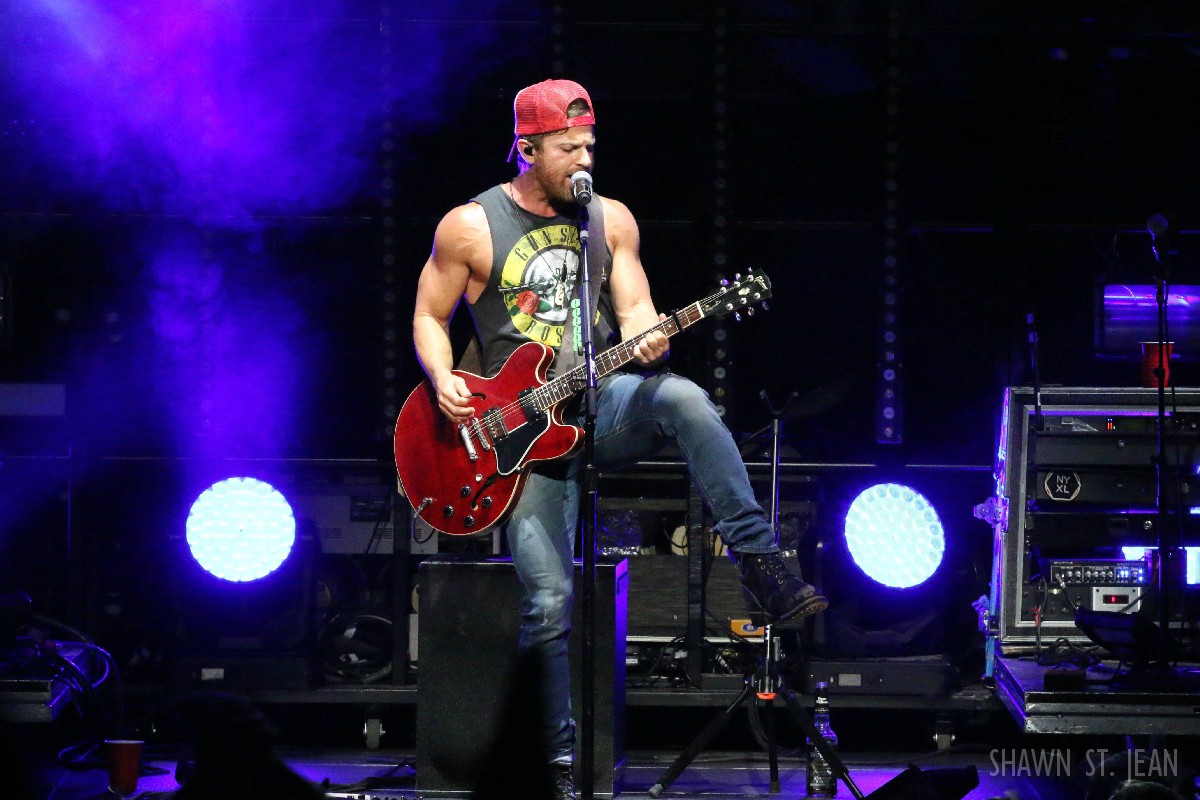 Kip Moore has one of the most loyal and dedicated fan bases in country music. He’s a true road warrior, performing over 200 shows a year, opening for headliners like Lambert and Dierks Bentley, as well as his own headlining tours that have taken him all over the world.

Moore’s sophomore album, Wild Ones, was released one year ago to rave reviews. Fending off outside influences looking to capitalize on his prior hit singles, the album was a real statement on staying true to himself. Moore said:

Moore definitely didn’t disappoint his fans Friday night in Hartford. When you see Kip perform live you can be sure of one thing – he’s going to give you everything he’s got, both physically and emotionally. His personal influences from artists like Sam Cooke, Bob Seger, and Bruce Springsteen help to create a style very unique in the country music genre. From Running For You‘s story of love and heartache to the unapologetic honesty of I’m To Blame, Moore’s powerful, gritty voice grabs a hold of you and doesn’t let go.

Moore’s Me And My Kind Tour starts September 30th with special guest Jon Pardi. The tour, which already has sold-out shows in Chicago and Minneapolis, comes to NYC on December 1st at Terminal 5. 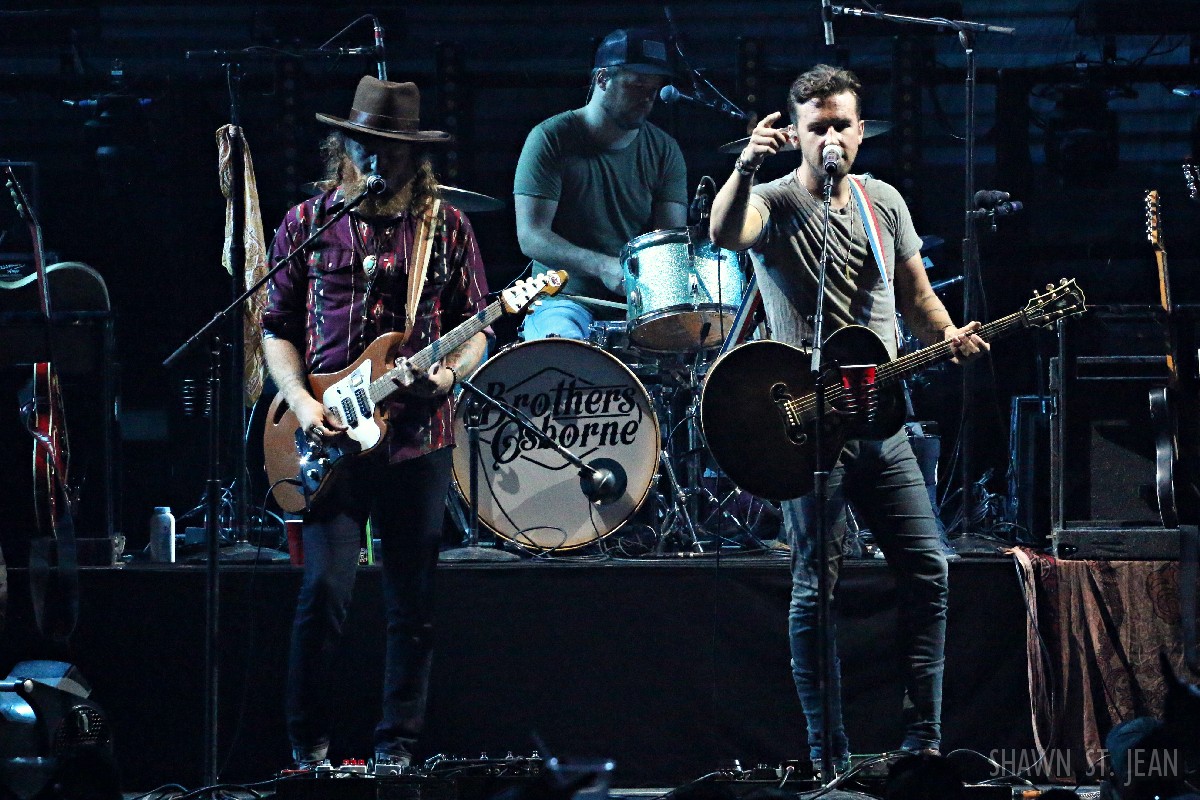 Grammy-nominated duo Brothers Osborne kicked the evening off and got the crowd all fired up. Maryland-natives John and TJ bring a unique, soulful approach to country music. The BROS have released a trio of hit singles from their highly anticipated debut album Pawn Shop: Rum, Stay A Little Longer, and their latest, 21 Summer – all of which were big crowd favorites in Hartford.

I’ll leave you with a final thought from Jeff Tudisca:

“My brothers and I always said at the end of the day watching the sun go down, Take a look boys, you might never see this again.”

I caught up with Jeff on Sunday morning to hear all about his experience meeting Miranda at Gillette Stadium on Friday night.

Miranda’s tour manager and a few other people from her team met Jeff and his wife Angelica while they were waiting to see Lambert. They were all really happy that he was there, and told Jeff that Miranda had cried that morning watching the video from Hartford again, and that every person they knew had watched it repeatedly.

Jeff was in shock as he walked around the corner and saw Miranda. The fact that she knew his name floored him. They spent time chatting about how that moment had gone viral, and how her dad had sent her three videos from that night.

Reflecting on everything that’s happened since he raised that poster in Hartford Jeff said, “This last week has really changed me and put so much in perspective. I can’t tell you how happy its made me. Music has always been one of my greatest passions in life – especially Miranda. I never expected my words to have this impact on so many people.”

Jeff continued, “These kind of things don’t happen to me, they just don’t. I have had a very rough go of things. I lost my step mom on my last Iraq tour. And within the last three years I’ve lost my mother, grandmother and father in-law. I know that if they were all here for this they would be over the moon.”

Jeff got choked up as he thought back to that night after the concert.  “The only thing I wanted to do was call my mother and tell her,” he said. “She knew how much Miranda meant to me. It rips your heart out when you have something you want to tell someone, but you just can’t. That is why I told Miranda what she did for me. Life doesn’t wait around for anything. I knew that I had to tell Miranda exactly what she did for me. I may never have had that chance again.” 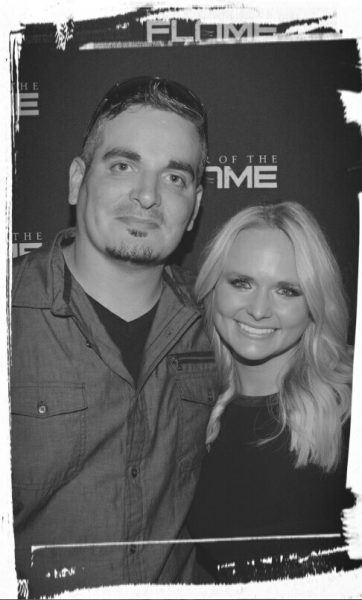 Jeff with Miranda on August 26, 2016 at Gillette Stadium. Photo courtesy of Jeff Tudisca. 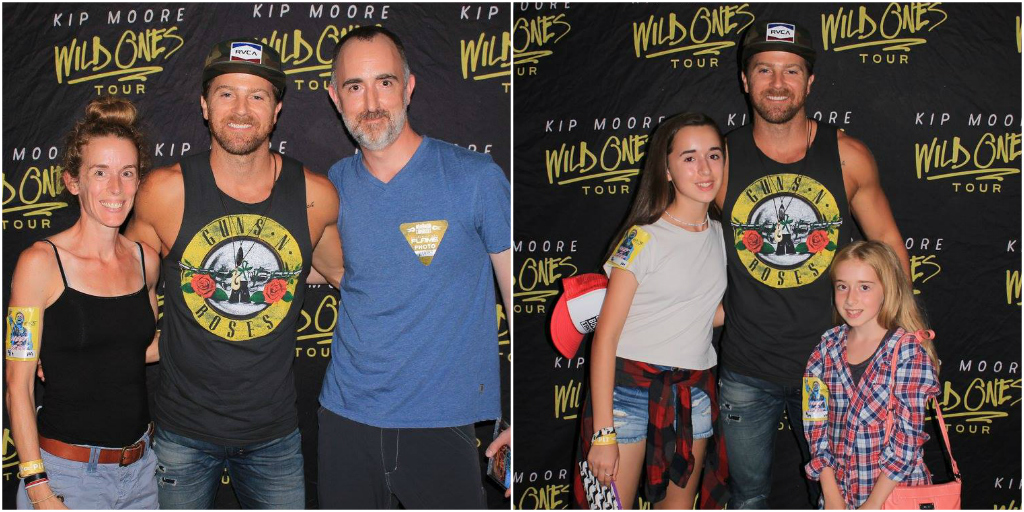 Kip Moore with The Country Scene’s Shawn & Jen St. Jean and kids (they still haven’t taken off the Somethin Bout A Truck hats that Kip signed for them).

Fastest Girl in Town
Baggage Claim
Kerosene
Heart Like Mine
Bathroom Sink
Rock and Roll, Hoochie Koo
Sweet By and By
Over You
That’s the Way That the World Goes ‘Round
All Kinds of Kinds
The House That Built Me
Vice
Mama’s Broken Heart
Covered Wagon
Automatic
White Liar
Little Red Wagon
Gunpowder & Lead
Encore (featuring Kip Moore and Brothers Osborne):
Willin’
Me and Bobby McGee 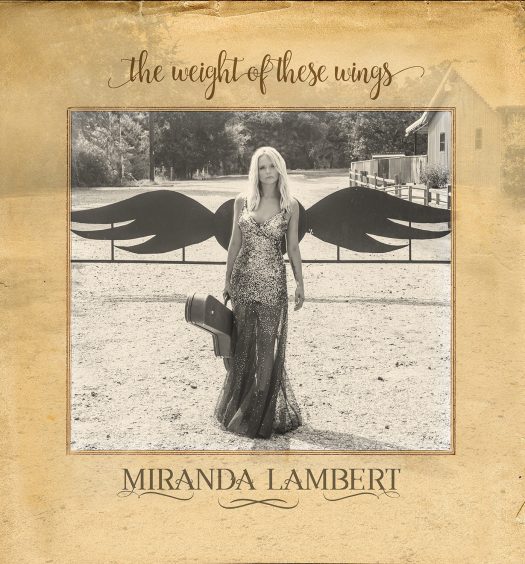 Miranda Lambert – The Weight of These Wings

Read More
Miranda Lambert – The Weight of These Wings 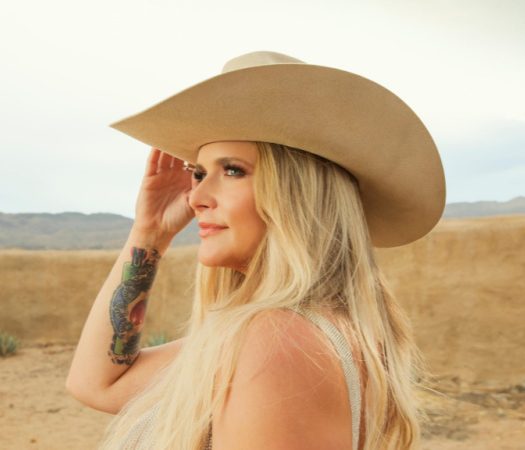