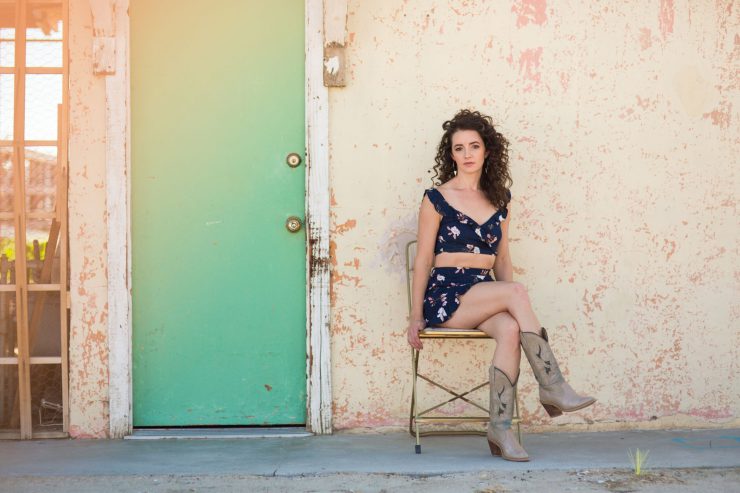 Interview With Michaela Anne On The Release Of Her Third LP, Desert Dove

I recently got to chat with Michaela Anne about her new album, her love for Shania, and never giving up.

“Straight jobs and steady pay were never in our cards to play / Late nights, songs to sing and long drives are our trade / Chasing mountain highs and painted skies will keep us on our way,” sings Michaela Anne on By Our Design, the lead track off her forthcoming third LP, Desert Dove. As the song starts you’re immediately transported to the California coast where Michaela recorded the album, as a dreamy sequence of strings combines with her stunning vocals.

“It’s not a typical way that a song starts out,” Michaela told me over the phone as she was driving home from teaching a music lesson. “I can’t think of many other songs that sound like that. It’s not like it starts with the guitar lick like so many other songs of mine and everybody else’s. So, one, I wanted it to grasp people that way. And two, the sentiment of the song and the way that it’s a reflection on life and really giving in to this lifestyle of not having ‘real jobs and paychecks,’ and seeing and judging wealth and success by our own terms versus what we might have thought from society, meaning a certain amount of income and a house and whatever it is.”

For Michaela, the song felt symbolic. Not just what she wanted her first message to be for the listener, but also for herself.

The video for By Our Design succeeds in bringing to life visually what the song achieves sonically. With the look and feel of a home movie, the video captures sweet, quiet moments shared by Michaela and her husband, musician Aaron Shafer-Haiss. In coming up with the creative concept for the video, Michaela found inspiration from her childhood – a love for the tv show The Wonder Years. As the opening credits roll, old Super 8 footage showed life in the suburbs for 12 year old Kevin Arnold and his family and friends, Paul and Winnie, with Joe Cocker singing With a Little Help From My Friends.

Thinking back to it makes Michaela really emotional. “I feel like I’ve always been taken by that sentiment and family and love and relationships,” she said. “And I think I’ve almost devalued that a little bit in my journey as an artist, because I thought it wasn’t interesting or innovative enough. And that’s been part of my process this time around is through better or worse really embracing what it is that I love and what makes me feel good even if it’s been done a million times and not interesting to other people.”

Michaela has now made a record in New York City, then in Nashville, and then in California. “I really do think you can hear that in each record,” she said. “Just the mindset of living in New York and recording kind of piecemeal. I was working a lot, other jobs and trying to sit in recording sessions here and there.” Moving to Nashville Michaela found she had room to breathe a little bit. “And then, recording this last record in California, I went out there for three weeks, there were no other distractions,” she explained. “I wasn’t at home, I didn’t have to clean my house or stress about anything other than just focusing on the music.”

Produced by Sam Outlaw and Kelly Winrich, Desert Dove is a transformative piece of work from Michaela, and her first since signing to Yep Roc Records earlier this year. The album reflects on this point in her life, where it’s no longer a question of whether music is going to be her career.

Following the 2016 release of her second album, Bright Lights and the Fame, Michaela found herself facing an internal debate. On the one hand, it was a really exciting time in her career and people were congratulating her for it. On the other hand, most people, especially in this age of social media, were only seeing one side of her journey.

“They don’t see all of the shows that you play where maybe five people come,” she said. “And the money that you lose, and the rejections that you face as people don’t get back to you. Where everyday you’re battling, Am I worth anything? Is this stupid? Does anybody cares about what I’m doing? And then also battling, Am I completely self centered to think that what I’m doing is worth all of this? That anybody would want to listen to it?” 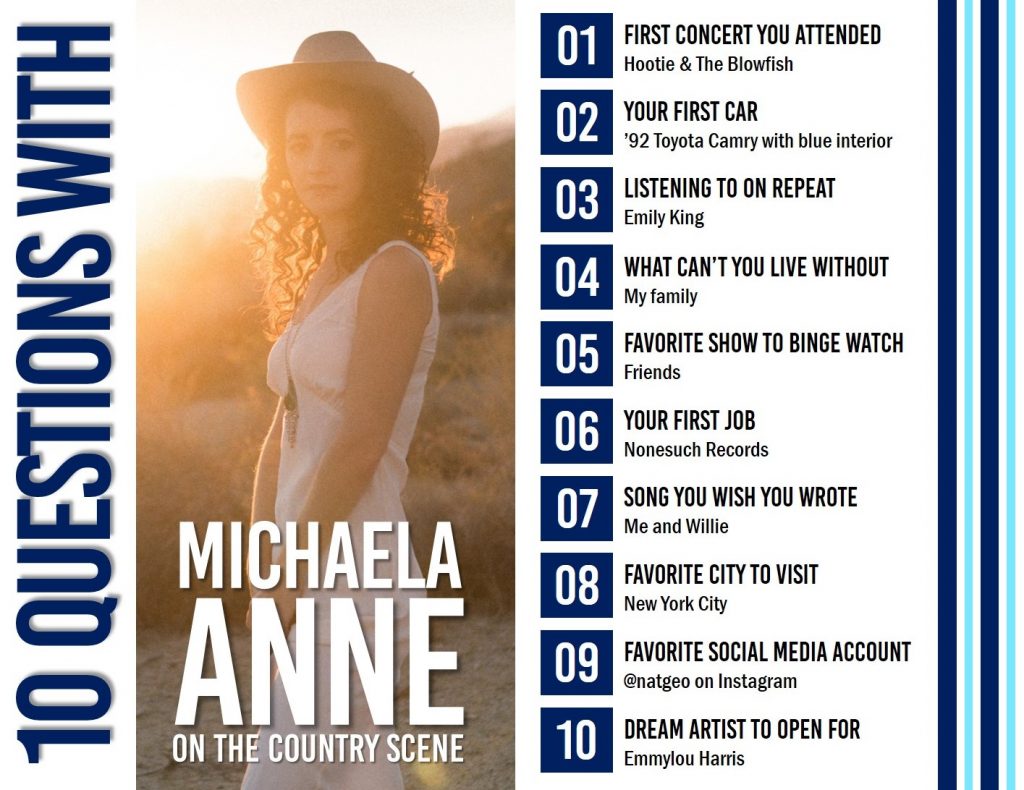 Thankfully Michaela has a very supportive network of people behind her. She credits her parents who have always encouraged her to focus on what’s important in life. “No matter what path you choose in life, it is not without challenges,” she said. “And at the end of the day, you’re doing what you believe in. That’s what has to drive you.”

The Benefits of Over-Thinking

The lyrics to Michaela’s songs come across as very genuine and honest. She credits a mix of autobiographical and observational inspiration. A self-described over-thinker, Michaela spends a lot of time dissecting everything from her friends’ relationships and what they’re going through to family members lives to her own experiences.

“I’ve never been someone who feels like I relate to the idea of being a poet and creating a lot of flowery metaphors,” she explained. “I feel like I identify more as just very plain spoken. My lyrics really come from just genuinely what is going on in my head. So, whether it’s my personal experiences in my relationships or a thought that I have and then my imagination runs wild and exploits that thought and idea and takes it further.”

From a very young age, Michaela has always been aware of the inequality and injustice women face. “It’s definitely influenced what I write,” she said. “I feel like there’s something deeply ingrained that still tells us that women stories aren’t as relatable to all people. They’re specific to other women and that’s it. And I think that that’s really unfortunate.” She mentioned a student of hers who thinks that only guys sing country songs, because that’s all she hears on country radio. Michaela sees the opportunity and also the responsibility to be conscious of it as her career grows to help bring about the change that she wants to see. 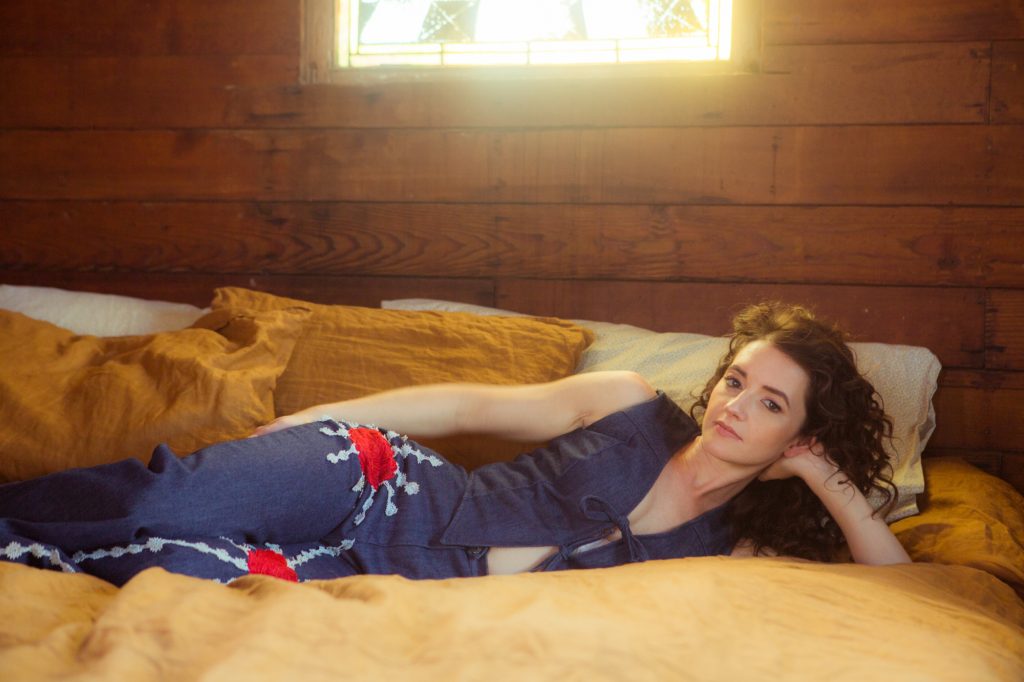 If I Wanted Your Opinion

“I’m not a poster on the wall I’m not a porcelain doll / I think it’s funny how you think you run the show / Don’t try to tell me how to be I’m not some puppet on a string / And if I wanted your opinion you would know.”

Michaela’s If I Wanted Your Opinion was influenced by lots of unfortunate real life experiences. “The many conversations I’ve endured of unsolicited criticism or feedback… I could write a book of really boring things that have been very inappropriate and insulting,” she said. “And even when they’re not insulting, sometimes I completely understand, they can be sincerely well intentioned, but still unsolicited and condescending.” Michaela’s goal with If I Wanted Your Opinion was to make it kitschy and lighthearted, and to maintain a sense of humor. “I try to always keep a conversation open so that there’s dialog and not just divisiveness,” she added.

Finding A Home At Yep Roc

In May of this year Michaela was signed to Yep Roc Records. After spending time with them, it was a team she felt very comfortable joining, particularly because of how they work as advocates for artists. “They truly had real enthusiasm and belief in supporting artists to be able to create and share the music that they wanted,” she explained. She also found comfort in the fact that her manager also manages Yep Roc artists Mandolin Orange. “I’ve toured with Mandolin Orange so there was a lot of familiarity and history through people that I’ve already worked with that was very reassuring – it didn’t feel like I was just jumping in blind to people and a company that I knew nothing about,” she added.

Michaela’s dad is a huge country fan, but growing up she had no interest in it. “I was way more into Whitney Houston and Madonna and R&B,” she said. “And I thought my mom was cooler because she really liked Motown.” But then the Dixie Chicks happened. And Shania Twain. And Faith Hill. And Tim McGraw. And then she was sold. And that turned out to be her gateway to some of the older, classic country artists. She started listening to George Jones and Loretta Lynn and Patsy Cline.

“I feel like I’m still constantly discovering country music,” she said. “But Shania Twain’s The Woman In Me was a pivotal record for me. And I don’t even think I realized the impact until now as an adult.” Having gone to a jazz conservatory and having spent so much time in some very “high brow” circles of music, Michaela found herself feeling embarrassed by admitting what she really loved. “Shania is someone that wholeheartedly embraced the pop,” she said. “And I think that’s fun and that’s awesome.” Michaela admires Shania’s ability to write empowering songs for women, like Honey I’m Home, but at the same time show vulnerability and romance. And as another petite brunette with big curly, wavy hair, Michaela’s fashion style is still influenced by Shania.

Looking back on all she’s accomplished, one of the things that Michaela’s most proud of is that she hasn’t given up. “I feel very supported and encouraged,” she said. “At the same time, there’s lots of stuff coming at you all the time that would make it very easy to just slink away and quit. And I think making the choice to just keep going regardless of what is coming back at you, that’s what I’m most proud of.”

“That drive and dedication and knowing of yourself and what you have to offer the world is something I strive for,” she added “I’m always learning about myself and I try to inspire in others, especially being someone who teaches all ages, because I feel like I work with people who might be grown adults and still struggle with that, that it’s a never ending life quest. That I think is the biggest accomplishment and also the biggest gift of choosing this path in life.”

Have you listened to Michaela’s music or have you seen her perform live? Tell us your thoughts in the comments section below!