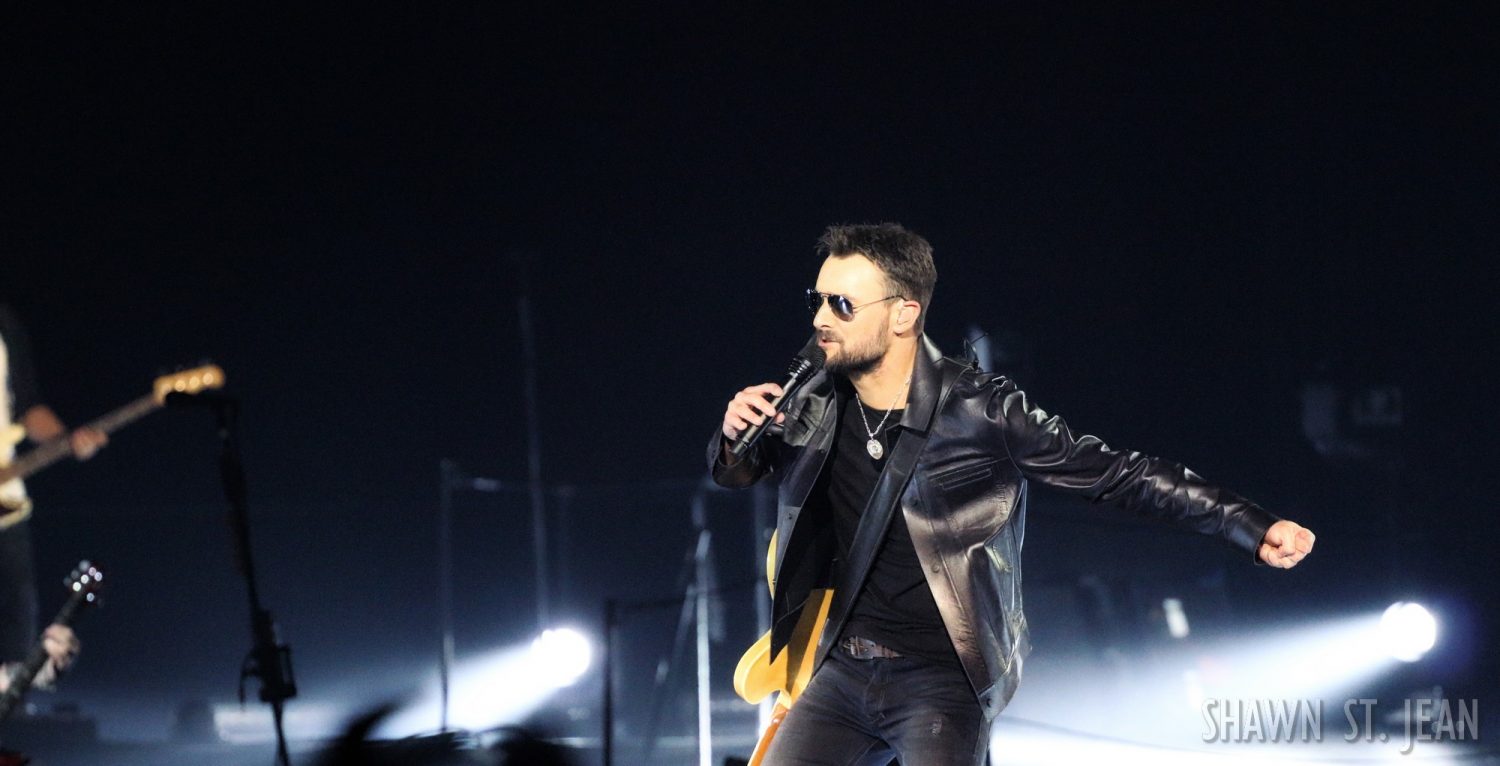 Eric Church, the reigning CMA album of the year award winner, was in Connecticut on Thursday for the first night of back to back shows at the Mohegan Sun Arena. Named after a track from his 2015 blockbuster album Mr. Misunderstood, Church’s Holdin’ My Own Tour kicked off earlier this year and will be making a total of 62 stops throughout North America.

As the lights went down at Mohegan just after 8:30pm, a single spot light illuminated a mic stand at the front of the stage and Leonard Cohen’s Hallelujah began playing. The packed arena joined in, singing along as everyone anxiously awaited Church’s entrance. The Holdin’ My Own Tour was designed true to it’s name: with no opening acts, fans get three-plus hours of Church. Church started into Mistress Named Music as he made his way to the front of the stage, guitar in hand. He wore a black leather jacket over a black t-shirt, jeans, boots, and his signature Ray Ban aviators. The stage allowed for 360 degree viewing and featured a giant four-sided screen hovering over the center. With minimal lighting, the design was understated, yet elegant in its simplicity. Joining Church on stage for this first song was the Groton, CT-based Ella T. Grasso Technical High School Concert Choir.

Other than a 20 minute intermission just before 10pm, Church never took his foot off the pedal. A total of 34 songs over the 3+ hours, including the entire Mr. Misunderstood album.

His set for the first half of the show included crowd favorites Drink In My Hand, Talladega, and Like a Wrecking Ball. For Wrecking Ball Church was front and center with a series of spot lights shining down on him. The rest of the stage was blacked out, really reflecting the intimacy of the song. In the end, he bowed to the audience and everyone erupted in applause. Church delivers lyrics with a cool calmness, nothing’s rushed, nothing’s forced. But you know there’s a whole lot of emotion behind it, and he frequently lets that emotion explode as he pumps his fist in the air and lets out a growling ‘Yeah’!

Near the end of the first set Church performed Pledge Allegiance to the Hag as Merle Haggard’s portrait was projected on to the giant screens over the stage. Church then got the crowd all fired up for the next half as he closed out with Smoke A Little Smoke, alternating back and forth between the left and right sides of the arena, seeing who could be louder. Church yelled out to the audience, “I don’t give a shit that its Thursday night, I don’t give a shit! We’re gonna go all night!” Church and his band reappeared on stage at 10:10pm, Church with a raised cup to the arena as they launched into Ain’t Killed Me Yet. Church’s energy seemed to increase the longer he performed, feeding off of the crowd. The second half set featured more favorites including Record Year, Give Me Back My Hometown, and Springsteen.

Church has been selecting one cover to perform on each stop of this tour that reflects the region. For Thursday’s show, Church wanted to find a New England song. “Here’s the catch,” he said. “I will not soundcheck it and we will not rehearse it. I’ve never done this with this band. If we’re gonna fall on our face, we’re gonna do it in front of everyone here.” Church proceeded to cross himself as they began playing Just What I Needed by The Cars. And fyi, they did not fall on their faces. Ric Ocasek would be proud. 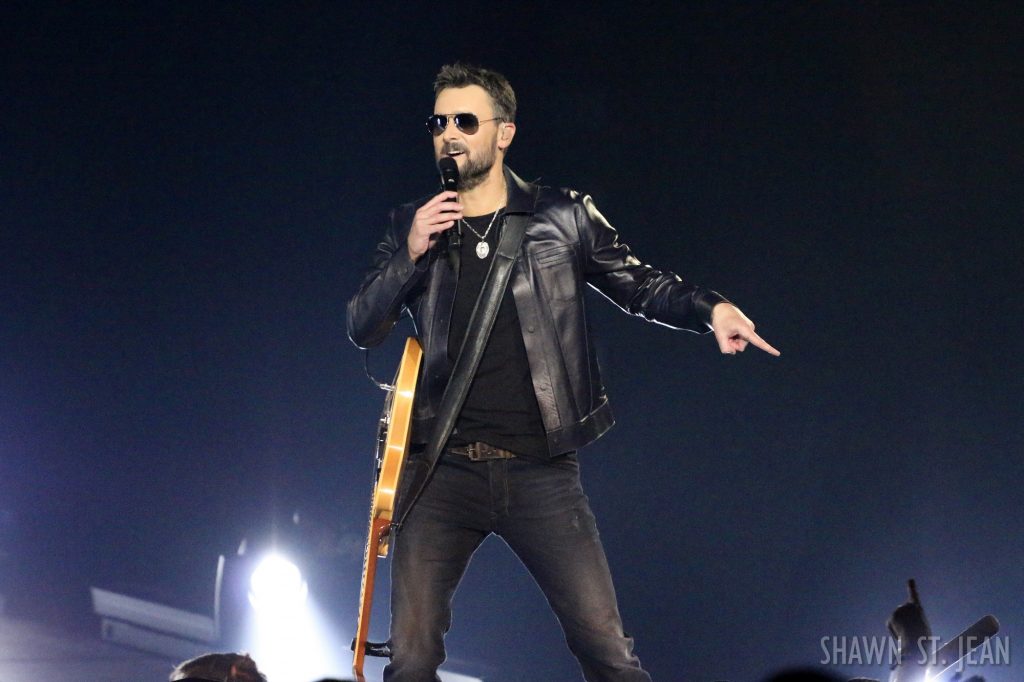 A moment that had everyone laughing was when Church explained the inspiration behind Three Year Old. When his now five year old son was three, he took him fishing for the first time – “It’s a great dad thing to do,” he said. “I had a Zebco 33. I put the bobber on it, and I put the worm on it. I probably took liberties in how fast I showed him, but I said you press here, you throw, and you reel it in. I handed it to him – that’s it, that was my lesson. I handed it to him, and he threw the damn rod in the water. Pretty far out there too. My first reaction was ‘Oh shit’. As I went to get the rod, I’m on my belly, I’m leanin’ to get the rod, and he threw the tackle box in there. That’s the honest to God truth. I did not know that a fishin’ pole would sink faster than a tackle box, I did not know that. That’s the genesis of where this song started.”

One of the true heroes of the night was back-up vocalist Joanna Cotten. Cotten brought her powerhouse voice front and center, right alongside Church, on a number of songs over the course of the show. It takes a lot of talent (and confidence) to take on the part of Rhiannon Giddens in Kill A Word. The Juilliard-trained Cotten was definitely up to the task. 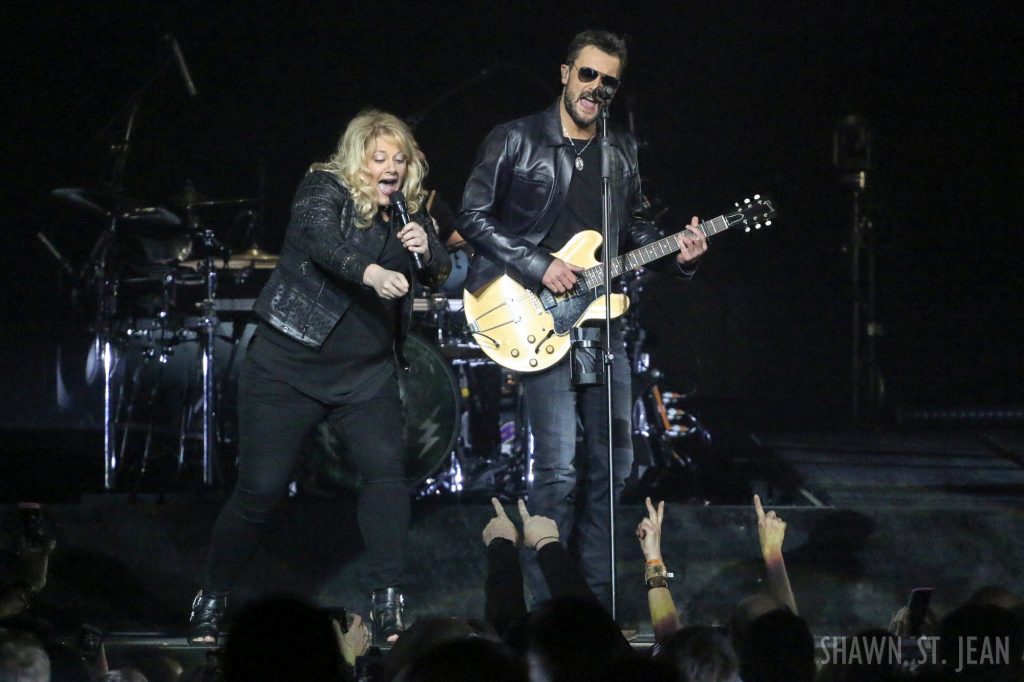 After the show I caught up with Jenna Saad who was with a big group of friends. They had all been surprised by their husbands with tickets to the concert. Over the past decade they had seen Church perform dozens of times all across New England. “He puts on a show with the same passion and fire that he did the first time we saw him on a small town stage,” said Jenna. They all felt a real connection and pride, having watched Church’s career grow from an opening act to headlining arenas. The highlight of the evening for Jenna and her friends came during Church’s performance of These Boots. Church stopped right in front of them and they launched their boots on stage. Church signed all of them, and even held on to one of the boots with an American flag design as he sang. “Of thousands of people that were there, it was us seven who were the lucky ones,” Jenna said. “We will cherish that moment in our memories (and boots) forever.”

Jenna Saad and friends with their boots that were signed by Eric Church Thursday night at Mohegan Sun. Photos courtesy of Jenna Saad.

I also spoke with Marlena Maglieri. It was her second time seeing Church perform live.”I’ve never seen an artist put so much energy and heart into a set before,” said Marlena. “Church delivered us a piece of his North Carolina roots and the spirit of Nashville to small town Connecticut and made us fall in love with country music even more. Electric, captivating, inspiring, and raw. This is his music. Kick ass show!” I couldn’t have said it any better.

Check out our exclusive photos from Church’s performance Thursday night:


The 2017 Holdin’ My Own Tour wraps up on May 27th in Nashville. For all of the latest news and updates on Church, head over to ericchurch.com. Be social with Eric: Facebook  |  Twitter  |  Instagram  |  Youtube