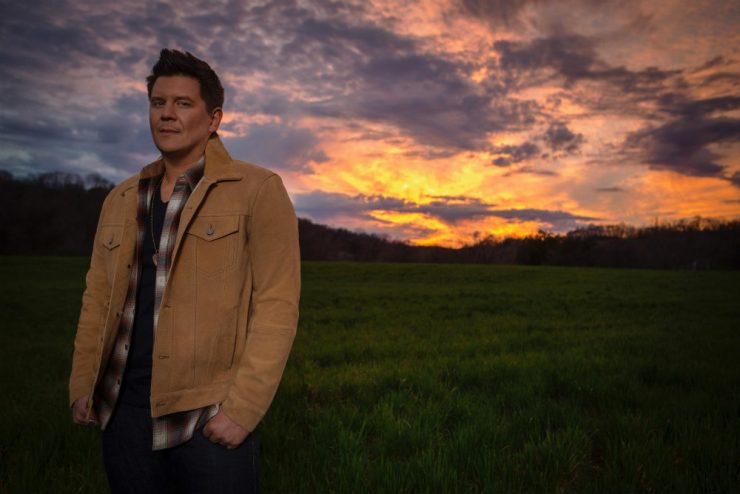 Interview With Adam Craig: Blessed with a Gift in a Ten Year Town

We spoke with the Stoney Creek Records recording artist about his new music, growing up on a cattle farm, and why moms always know best.

A prolific songwriter, Adam Craig has scored cuts by some of the biggest names in Nashville. But it’s really his passion for performing as an artist that motivates and excites him, a dream he’s been pursuing since moving to Nashville fifteen years ago.

If You’re Lucky is Craig’s current single at country radio. And while he didn’t write the song, he immediately felt a connection to the lyrics. “I remember the first time I heard it, I was just blown away,” said Craig. “It just hit me so hard and related to my hometown, how I grew up and all the things that I did growing up there.” Craig has found that fans at his shows and online have had a similar reaction, telling him how that song is all about their hometown. “It’s one of my favorite things about country music,” he said. “You relate to what you hear on radio. I’m very thankful to have that song.”

Over the past year, in addition to writing Craig took time to find songs written by others. “The way I see it, all my heroes, they cut outside songs,” Craig explained. “Why not take advantage of the mountain of talent that Nashville has in the songwriting community?”

Working with his producer Michael Carter, Craig sorted through a lot of songs before landing on Jessi Alexander and Chase McGill’s If You’re Lucky. “We had to pass on a lot of great songs,” he said. “Two of them are singles on the radio with other artists right now.”

One of the challenges for an artist cutting outside songs is making sure they can relate to the lyrics so that when they perform it night after night in front of an audience there’s that believable connection. “It’s a song that I wish I wrote because that’s my life, said Craig. “It’s so easy to go up every single night and sing every word like I wrote them, because it’s my story.”

Whatever You’re Drinking To

The other new track that Craig recently released is Whatever You’re Drinking To, a song he wrote with Michael Carter and Matt Rogers. “I remember the day that we wrote that,” said Craig. “We were in room five at the Fire Hall and I had just come off a one or two week run with Cole Swindell. I remember going into that room and saying, ‘watching Cole this last week, I want a Brought To You By Beer type song.’ Just the good, get the crowd on their feet, just let them have a good time, forget their day to day lives. They’re there to have a good time, and that’s it. I wanted one of those songs.”

Though it was just a demo at the time, Whatever You’re Drinking To served as Craig’s closing number when he toured with Luke Bryan in 2017. “It’s just so amazing to see the best of the best do it every night,” he said recalling his experience with Bryan. “Connect to his crowd, twenty thousand people. His authenticity on stage, I got to learn so much from it, either watching from side stage or front of house. It was just amazing to be out there and be a true fan of what Luke does. I’m very thankful to how he treated me as an opener.”

You’d think growing up outside Seattle Craig might have gravitated towards grunge as a kid. But without a neighbor in sight on his family’s cattle farm, Craig found country music in the 90’s. “It was just songs that talked about things that I was doing,” he explained. “It was just so relatable and I absolutely fell in love with it.” Though he did give me a damn good snippet of Pearl Jam’s Even Flow (Freeeeezziinn’ rests his head on a pillow…). 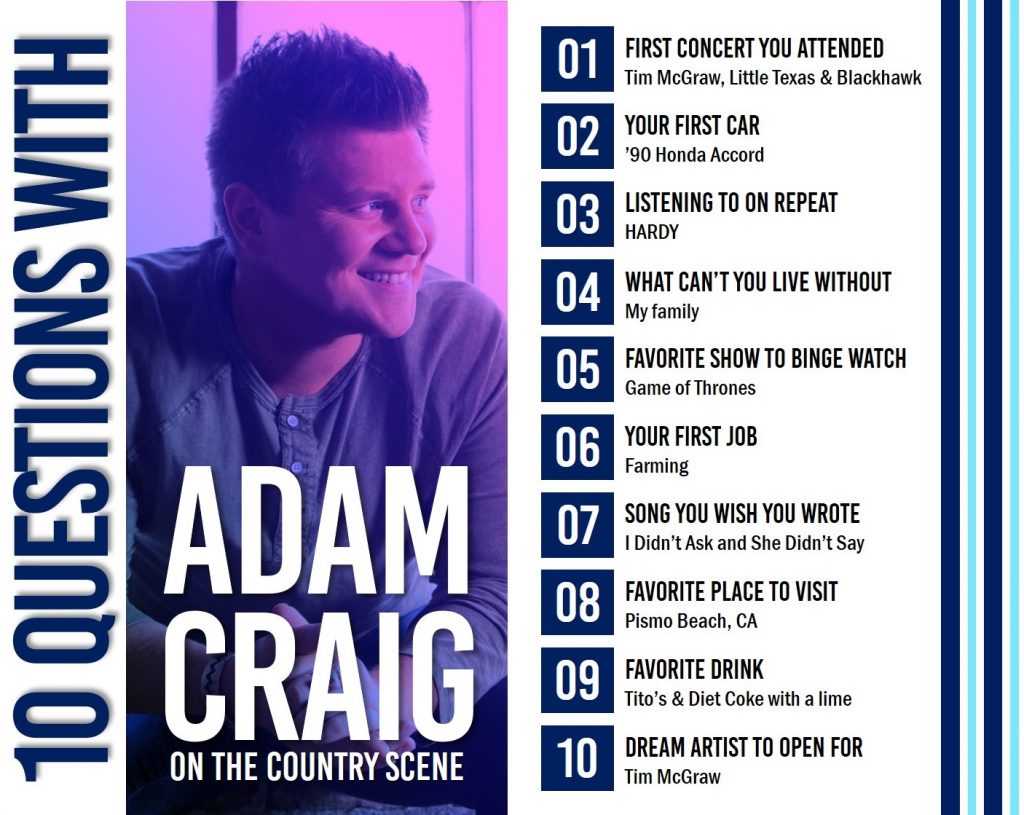 Craig was twenty-one when he moved to Nashville in 2004. Eight days after arriving in town he lost everything. Well, almost everything. “I came home, unlocked my front door, and it was chained from the inside, and the back doors were wide open,” he recalled. “Everything that I brought here was stolen from my apartment. Yeah, it was like a big old slap in the face right off the bat. They actually took my banjo out of its case, and left the banjo so they could fill the case up with other stuff. I bet you they’re kicking themselves now – that banjo’s in every song. Jokes on them.”

But Craig’s hometown pulled through for him. Together with his family they put on a spaghetti feed and raised a few thousand dollars for him to keep going.

Six years later he got his first cut by Jason Aldean (Church Pew or Bar Stool). Soon after he signed with Sony/ATV and spent the next few years writing 150-200 songs a year. By the end of 2013, nearly ten years after moving to Nashville, doubt began to set in. He flew home for Christmas and said to his mom, “I’m not even close to a record deal. I’ve only had one bit of success in Nashville, and that was three years ago. Nothing is happening. Maybe I’m not supposed to be doing this.”

Craig’s mom looked at him and said, “You’ve been blessed with a gift. It’s your obligation to share it with as many people as possible. Go back to Nashville, work your tail off, show up every day, have a smile on your face, be positive, and just outwork everybody.”

That was the inspiration he needed. “My battery was recharged,” he said. 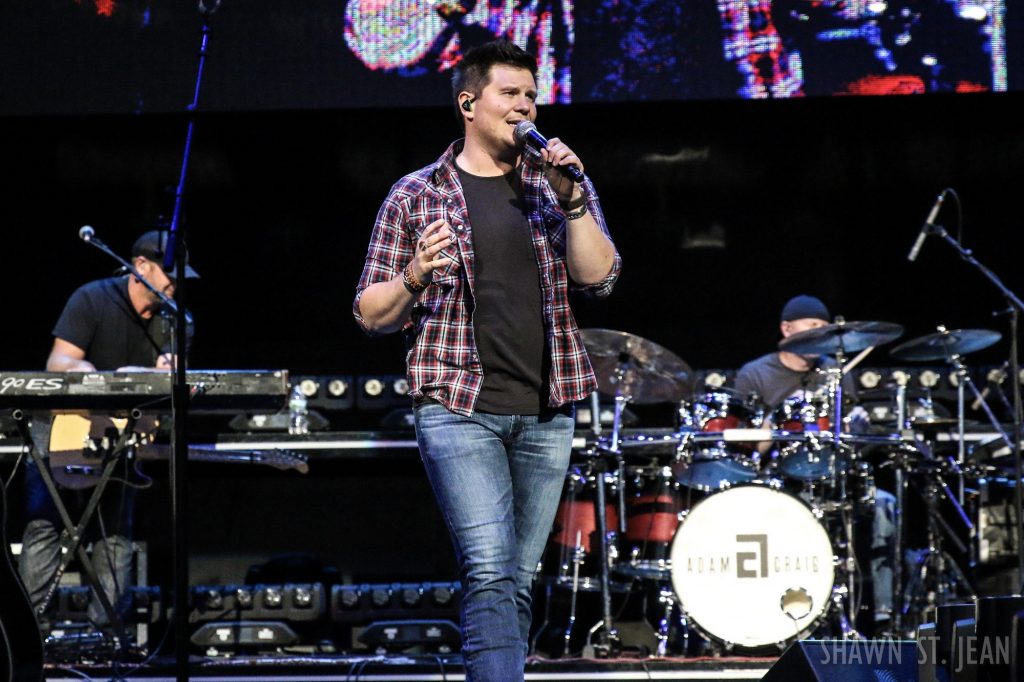 2014 hits and Craig is officially 10 years into a 10 year town. And on queue, the floodgates opened. “That month I ended up getting about 20 cuts: Aldean, Montgomery Gentry, Dustin Lynch, Parmalee, Love & Theft, Swon Brothers.” And then Craig learned that Parmalee was releasing his song Close Your Eyes, becoming his first single on country radio.

Riding a wave of songwriting success, in April of that year Craig went to meet with the head of BBR Music Group, home to many of the artists that were cutting his songs. During the meeting Craig was asked, ‘can you sing?’  He played a few songs for them and a week later had a record deal. Just four months after he nearly gave up, his dreams were coming true.

Craig isn’t slowing down. His eyes are set on getting his first number one hit and his own headlining tour. “I want to be in this for 20 years,” he said. “Just always be on the forefront of something really special. I want to continue to push myself and all the people that I write with and work with, and just continue to put out quality stuff.”

Have you listened to Adam’s new music or seen him perform live? Tell us your thoughts in the comments section below!